All Swiss Aquatics Water Polo Championships are suspended until the 30th of November due to COVID-19. 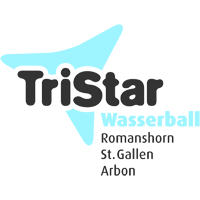 What was the starting point?

Three clubs (SC Romanshorn, SC St. Gallen and SC Arbon) were dissatisfied with current development of water polo sport in their clubs. It was understandable that their junior stuff should be promoted more intensively and become more encouraged. However, there was a certain lack of qualified and motivated personnel – such as coaches and people responsible for other tasks (judges, press, marketing, etc). For these reasons three clubs wanted to combine their forces in order to ensure strong and sustainable water polo development in eastern Switzerland.

All three clubs joined the water polo department of the fictitious organization "WBA TriStar" in October 31, 2008. Since that date all licenses of players were managed by the TriStar Water Polo Department. These and other administrative tasks were addressed by the new Technical manager Thomas Kunz. The technical manager coordinated all gaming and training operations. Water polo players of SC Romanshorn played in the NLB and held their home games in Romanshorn. The second team (formerly SC Arbon) played in the 2nd League and held their games in Arbon. The players who were not registered in the first team squad from time to time helped other teams (but the priority was given to the 1st team).

The swimming clubs St. Gallen and Arbon / Arbon Water-WiSo have joined the coordinating water polo association TriStar. While both clubs maintained different activities in the swimming and diving divisions, the water polo division had completely merged. That structure allowed using existing water area in the most efficient way. Due to the greater number of players more teams could be formed balanced at the performance level.

In the season 2015/2016 TriStar started the official Swiss championship with the following teams:

In recent years TriStar has reached the level of the best 5-10 team in Switzerland in junior sport. This was emphasized by winning the bronze medal by U13 in the season 2013. TriStar also provides two national teams (U17 and U15) and a junior team for the Women's National Team. 5 players are in the Eastern Switzerland Regional Selection U13 squad. This year the main goal is qualification of the best 4-6 team in U13 and U15 for the Final.

Good youth development in the medium term leads to the success of the older sportsmen. The first team has left National League B in 2013 after the numerous age-related issues and will start again in the 2nd league. With many young players the promotion to the 1st League in season 2014 can be pursued again. In the next 2-3 years TriStar wants to use all possibilities for taking place in the National League.

Currently in TriStar there are 64 active water polo players and about half of them are junior players. The teams have trainings from 2 to 4 times a week depending on the objectives. In winter St. Gallen club is training in the indoor pool Blumenwies. However, no championship games for U15 and older teams can be held here because of the low water depth. In summer home games are conducted in the outdoor pool Arbon. The trainings are held there from early May to mid-September and in all weather conditions. "

The junior teams (U13 and U15) are led by SC St. Gallen Club and are created from two clubs. Each of these two teams is required to swim in its catchment area. The coaching staff of the WBA TriStar currently consists of Thomas Pleyer (juniors U15/17), André Kiefner and Daniel Mikuska for the 2nd League.

In the season 2015 the focus is the integration of young players into the first team and thereby ensuring the constant level of performance in the championship. In the medium term it is planned to take part in the National League B Championship to increase the attractiveness for the young and strong junior players.