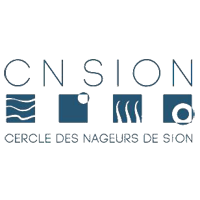 It was in 1927 that Messrs. Hermann Meyer (Chairman), Reinhardt Ernest (Vice-Chairman), Jean Bruttin (Cashier) and André Tavernier (Secretary) founded the Circle of Sion Swimmers. Since its inception, the purpose of the club is to encourage and develop the practice of swimming in all its forms in Sion and the surrounding area.

With coaches and motivated instructors, mostly former swimmers, Sion's Swimmers Circle provides the following: learn, improve, and practice and especially in a friendly atmosphere. It is at the height of Sion, in Montorge Lake, swimmers are engaged in their favourite sport. In 1922 a committee was formed to build a pool in Sion. It was chaired by Paul de Rivaz and had five other members: Fabien Henri Dufour, Ernest Pfister, Cyrille André Coppex and Tavernier. Work began in the same year at the site of the current pool. Barracks were built for ladies and gentlemen, as cloakrooms were separated into two, because we did not have the right to mix both sexes.....! In the summer of 1923, the pool was opened to the public.

In 2012 our club will blow its 85 candles! This is keeping in mind its past swimmers. Sion Circle intends to build its future by remaining faithful to two values: sportsmanship and fun.