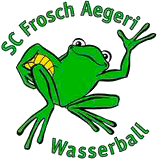 Swimming club Aegeri was established in 1956. Spa and Tourist Association Unteraegeri was the founding Institution. The occasion for establishment was the development of long-distance swimming in Aegerisee. After the first establishment euphoria the situation was more or less quiet until 1965. At that time club consisted of the relatively large executive board and about 2 - 3 swimmers. In 1965 it was decided by the board to start playing water polo. At the same time swimming club Aegeri was renamed to "Swimming Club Frosch Aegeri”.

The real activity started in summer of 1965. SC Frosch Aegeri competed against Horgen, Luzern and Zug (all were 1st League teams). The team of SC Frosch Aegeri consisted of about 6 "non-swimmers" and 3 players who at least had a basic idea of how to do crawl swimming!

In 1966 SC Frosch Aegeri announced their team for the championship in the 3rd League at Swiss Swimming Federation. The highlight of this season was the match awarded by the Association of the Aegeri (because the association didn`t find any other event organizers in Switzerland). Spanish team was the opponent for Swiss national team. The game ended with a narrow victory of Iberians. The second peak in this first season was the big International Tournament in Aegerisee at the Aegeri-Cup donated by the hosts of the Aegerital. Limmat, Zurich, Horgen and the top league club Esslingen played enthralling matches at the lake. Esslingen won the tournament. Both organizations brought SC Frosch Aegeri great praise from the guests and Swiss Swimming Federation, as well as strengthened overall image of SC Frosch Aegeri.